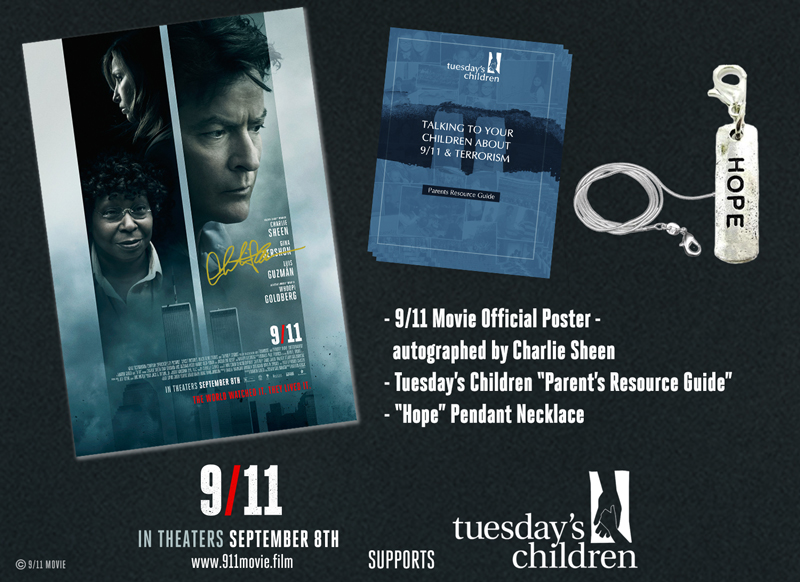 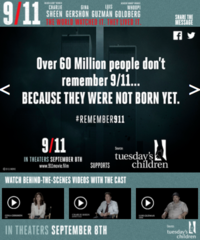 9/11 opens in theaters on September 8 and features an all star cast including Luis Guzman(The Taking of Pelham 1,2,3), Gina Gershon (Showgirls), Wood Harris (Justified), Jacqueline Bisset (Dancing on the Edge (BBC), Welcome to New York), Olga Fonda (The Vampire Diaries) and Bruce Davison (X-Men).  Based on true events, 9/11 tells the story of 5 people trapped in an elevator in the World Trade Center. As the sun rises in NYC on the morning of September 11, 2001, the day seems no different.

In the World Trade Center, a billionaire sits in his attorney’s office awaiting a divorce hearing against his wife. In a west side apartment, a bike messenger kisses his 5-year old daughter and sings her “Happy Birthday” before leaving for work. A maintenance man gets dispatched to help a tenant with his lock. In an upper east side apartment, a young model musters the courage to break up with her sugar daddy. As random as random can be, these individuals step into a crowded World Trade Center elevator.

Wrapped up in their own world, they all ride silently hearing only the sound of the elevator giving notice of each floor. When the elevator stops on the 34th floor, it empties leaving only these five behind. Moments later … their world changes as the collision of a jet into the North Tower incapacitates the elevator.

With no understanding of what has happened and is happening around them, these fives are forced to band together and fight against all odds to escape from the impending horrific collapse. During these critical minutes, a story of courage, faith, and the will to live unfolds.

So tell me, do you remember where you were on 9/11/2001? I do! I was at home getting ready for my long ride to work and I was watching Channel 3 News when I sat down on the couch to put my shoes on when I saw the second plane fly into the second building.  At first I thought it was a movie, but I checked the channel and it wasn’t.  I called work and asked my boss’s wife if she saw and I told her to put on the TV, and that I was going to be late.  When I drove there it was scary.  For one there wasn’t a plane in the sky!  I had to drive past O’Hare Airport,  I worked close by and everything was grounded.  Traffic went slow going by the airport.  I wanted to cry, but couldn’t.  I was scared and shaken!  I just wanted to go home and be with my husband.  No one could believe what was happening.  I know I couldn’t!   Both hubby and I were glued to the television for weeks and our home was quiet.  We held each other tight as we slept.  When I went to work I kept looking towards the sky and even when I left my home or sat on the front porch.   I just sat in front of that television for hours saying prayers for anyone in the planes, buildings, on the ground, and for all the people helping.  I kept praying for them to find more people, but all we saw were the images playing over and over again on every channel people running for their lives covered in a thick layer of white dust.  The dust took hours to settle to learn the total damage and that was just 2 of the planes that cause the 2 towers to collapse.  That night we learned about what had happened thus far & about the heroes that were saving an untold number of people by forcing through the cockpit doors  and stopping another terrorist attack. This cost everyone of these passengers their lives. There was also the other plane that hit the Pentagon. By the end of the night 2 towers had collapsed, and they would be searching for days for anyone alive, then bodies. We lost 2,996 people that day, over 6,000 people were injured, and more than $10 billion dollars in damages of infrastructure. As Americans watched and flags flew on our houses and cars everyone had changed that day and life was no longer as we knew it. People & dogs volunteering and donating from every state. People driving in to try and help to find others and teach us how to protect ourselves God forbid something else should happen. Until this day I shutter at the thought of it. While we watched TV I wanted to do something myself so I crocheted a flag and matching pillow and it made me feel better and my husband donated money to our Red Cross and that made him feel as though we helped too.  After I was done I felt better and every year I bring out what I made.  (see below)

The prize will be sent via FedEx or USPS. No P.O. Boxes please. Please note that the assets included within this message were delivered to you to promote 9/11 Movie. Any actions (including contest and competitions) that you complete with the provided assets are your liability, and should comply with both local and international laws. Also, please remember to disclose that you are working with 9/11 Movie, or that 9/11 Movie supplied these materials to you if required by local law.

*Disclaimer:   Opinion in this Post is 100% my own and no monetary compensation was given.  I received a product sample in order to facilitate my honest review.