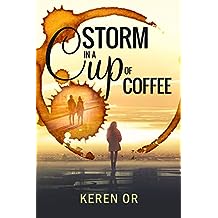 Keren Or is a screen writer & playwright with a focus on musicals, which combine her two life passions: music and writing. She holds a BA in psychology and an MA in screen writing for movies and television. She is the mother of 3 young children and married to the love of her life. After working as a therapist and facing the greatest challenge of all–fighting for her life–she decided to fulfill her dream and become a writer, so that she may touch the hearts of as many people as possible through her stories and life experience.

Can Eli accept the man who psychic Lena insists is her love destiny? “…I am feeling that his last name has something to do with a stone, some type of stone… If I’m right…Lucas will be your destiny.” On hearing for the first time that Lucas is to be her husband, twenty-five-year-old Eli initially encloses herself within a black cloud of stubbornness. She flatly rejects this insistent prediction of Lena’s, a psychic who reads coffee grounds. Eli cannot accept that fate has determined that she should have a relationship with a divorced single father.

And if Eli believes Lena, what will it take to make Lucas fall in love with her?

But after guaranteeing her a unique love and a fulfilling and enduring life as a couple, Lena manages to get through to Eli. Determined to conquer Lucas and bring the prophecy to fruition, Eli begins a most purposeful journey, aimed at making Lucas fall in love with her. But this could turn out to be… an impossible mission!  Eli’s captivating story brings us a moving tale of love, determination, and faith.

The author to me had a way to turn a love story gone wrong, but it turns out to be the same ol’ thing of a woman going after the wrong man.  Woman goes after a man who doesn’t really care and she falls in love and does everything she can to make him hers and gets hurt.  Isn’t that the story of life sometimes.  Going after the wrong man is more interesting than going after the one that is really meant for you.  25-year-old Eli hears from a psychic in Storm in a Cup of Coffee that her destiny is to wed Lucas, a divorced man that was a single father?  She can barely believes what she hearing, but even more, she refuses to accept it.  The psychic Lena manages to convince Eli by telling her that they will have a special kind of love that she will be in her happily ever after.

Eli’s whole life is one failed relationship after another, most of which is due to the fact she always chooses the wrong guys.  Come on now I’m sure you know someone like that like your little sister or your best friend, right?  It’s always the guy you never expected too, right???  A guy you think is really good & shows a honest interest your friend or whoever you’re trying to help usually runs away from.   Right?  So believing in the psychic’s fortune-telling synopsis  even makes our Eli chase after a man and tries to get him to marry her, even though he show very little interest in her from the start for pity sakes. The journey takes Eli on a quest of self-discovery, allows her to discover things about herself she otherwise would’ve never figured out, and finally finds some hidden strength.  Glory be!  So……. this is the type of story you hear at lunch with your girlfriends & and like I said kind of love & man your mama warned you about in the first place!  WHEW!  Normally I would never read a story like this, but that’s another story, BUT…… if you want your daughter or a friend like this to read a lesson they MUST LEARN… THIS IS THE ONE FOR SURE!
It would definitely make a great Christmas gift for your little sister or that friend that needs to learn a lesson!  Thanks for reading and you can get this one at amazon.com!  https://www.amazon.com/Storm-cup-coffee-Keren-ebook/